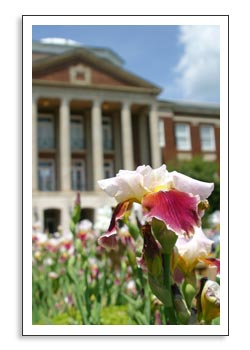 The iris is mentioned as the Meredith College flower as early as 1904, in connection with the changing of the College colors to maroon and white from the "less dignified" palette of violet and gold.

In 1968, Meredith College alumna Loleta Kenan Powell, class of 1941, developed and registered an iris hybrid she named Meredith Hues. Powell created this by crossing the blackest iris and the pinkest iris in her garden, resulting in a flower she described as having “standards of creamy white and falls of maroon neatly edged with white.”

The Meredith Hues Iris was recognized as the official flower of Meredith College in 1997. The irises are planted around Shaw Fountain in front of Johnson Hall; near Grimmer Alumnae House; in an iris garden near Cate Center that honors the 105 charter members of the Iris Club, an alumnae giving club; and at other locations around campus.