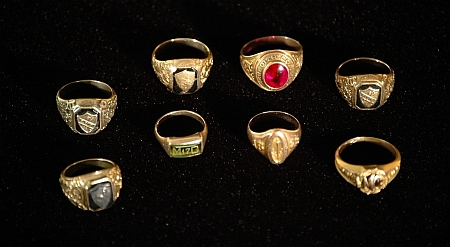 When Mabel Hawley Yarborough Bullock, ‘33, received her Meredith College ring, she could not have known that 80 years later her granddaughter, Elizabeth Hawley Oates, ‘13, would have her own onyx. Elizabeth reflects on the differences and similarities:  “Although my Granny’s onyx and mine look different, at the core they still connect us back to the same place; they connect us back to traditions, to family, and to memories and lessons that will remain with us forever. On the surface, Meredith was a very different place back when my grandmother was here. But at its core, Meredith was the same place it is today. In its essence, Meredith stands for sisterhood, loyalty, leadership, and so much more. And the onyxes we place on our fingers will be a constant reminder to us as we continue on our life journey; these rings will remind us of what we learned here, both academically and socially, and the great memories we shared with friends and classmates.” 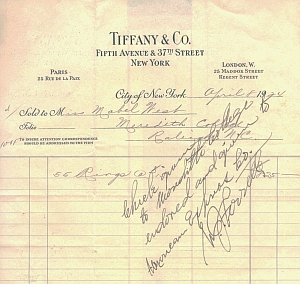 The beloved Meredith class ring has a long and noteworthy history. While the date of the first ring is not known, the oldest ring in the College Archives features a gold band with the letters “MC” and “1916.” The 1917 ring added a green stone to the gold band.

The ring changed into an elongated gold oval by 1922, with a torch (lux) in the center, the alumna’s degree on one side and graduation year on the other. In 1924, art professor Ida Poteat and Mable West, ’24, designed a new ring that was made by Tiffany & Company in New York and sold for $15.00. This ring marked the first appearance of a black onyx, an octagon containing the Meredith seal in gold with oak leaves on each side.

The next modification appeared in 1950 when a student committee selected an oval synthetic ruby with a gold band. The words “Meredith College” surround the red stone, with the College seal on one side and oak leaves on both sides. However, because many students thought this was too similar to a high school ring, art professor Douglas Reynolds led a group including Jean Dula Fletcher, ’53, and Ann Lovell, ’54, in a redesign. An oval shaped cameo dinner ring that Jean wore as a student is said to have been an inspiration. The newly designed ring, still worn today, is an oval black onyx with the Meredith seal engraved in the lower half and oak leaves incised on either a silver or gold band. Jostens Company made the new design available to the Class of 1954. 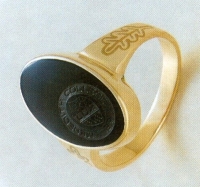 The only change since that time was for the 1991 Centennial Class, when the oak leaves were moved slightly to allow space for the year. The design returned to the original the next year. The Class of 1992 started a new tradition, Ring Dinner, when students receive their Meredith onyxes. This celebration expanded into Ring Week in 1997.

Degree-seeking undergraduate students who have completed 60 hours of coursework are eligible to purchase their rings. An undergraduate wears her ring with the seal toward her; at graduation she turns the ring around so that the seal “faces the world.”

Meredith’s post-baccalaureate ring, introduced in 2006, is available in two versions, designed to suit the needs of both female and male post-baccalaureate students. However, the traditional onyx continues to be offered only to undergraduates.

“The onyx is so much more than just a ring. Shining black with the College symbol, the foundation of this ring is created by not only the Meredith College women of today, but ones from the past. Our Ring Dinner is not merely about getting a simple piece of jewelry, but it is about sisterhood, unity and friendship, things that have gotten me through trying times and heightened the amazing times even more.”
--Kiran Subramaniam, ‘11