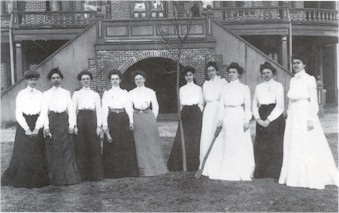 Meredith's first graduating class, in 1902, has become known as the Immortal Ten. At Commencement in 1902 nine B.A. degrees and one M.A. degree were awarded by what was then called The Baptist Female University. In addition, that day one diploma in music, two diplomas in art, one certificate in music and two certificates in art were given. The degree recipients were able to receive their degrees in three years rather than four because they had either come from other institutions or been privately taught before attending.