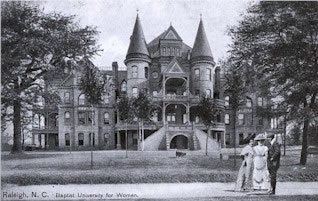 1835   North Carolina Baptist State Convention appoints a committee “to consider the establishment of a female seminary of high order.”

1838   Thomas Meredith, founder of the Biblical Recorder, calls for an institution to provide "a first-rate course of female education." Thomas Meredith history

1889   After a delay due to the Civil War and Reconstruction as well as the general lack of interest in women's education, Leonidas Polk introduces a resolution to the Convention for a Baptist female college. His resolution is adopted unanimously.

1891   The state legislature grants a charter for the Baptist Female University.

1893   To raise money for the school, Oliver Larkin Stringfield begins traveling across the state and Fannie E. S. Heck organizes the Woman's Executive Committee of the Baptist Female University. Economic conditions in the 1890s make fundraising difficult and donations often are small, many one dollar or less.

1895   Construction begins at the corner of Edenton and Blount streets in downtown Raleigh. Adolphus Bauer, who designed the governor's mansion, is the architect.

1899   Baptist Female University opens in September with nineteen faculty/staff members and more than 200 students. James C. Blasingame is president. A college year is three terms of three months each. Room and board costs $36 per term, and tuition is $17.50, with additional fees for music and art.

1900   President Blasingame resigns after one year and Richard Tilman Vann is chosen to lead the University. An accident at a cane mill when he was a child resulted in the loss of both hands and most of his arms. Despite this, he obtained an education and was a respected pastor and teacher.

1905   Student government, one of the first in the South, is initiated.

1906   The tradition of the hiding of the Crook begins. Crook history

1915   After fifteen years, Dr. Vann (who wrote the words and music to Meredith's "Alma Mater") retires. During his presidency, enrollment increased to almost 400 and the endowment to $127,000. Charles Edward Brewer, professor of chemistry at Wake Forest College, is selected as third president. 1915 also is the first year of Stunt.

1921   Meredith is admitted to Southern Association of Colleges and Schools. The Twig, the student newspaper, begins; it will be renamed Meredith Herald in 1986.

1924   Graduates become eligible for membership in the American Association of University Women. The faculty presents Alice in Wonderland to entertain their students. Construction of a new campus begins on Hillsborough Street, despite the objections of some who think this site is too close to State College.

1926   In January, students return from Christmas holidays to the new campus with six Georgian-style buildings that form a quadrangle: an administration building, a cafeteria, and four dormitories.

1928   Association of American Universities places Meredith on its list of approved colleges.

1939   President Brewer retires. He oversaw the construction of and move to the new campus; enrollment has increased to almost 600. Dr. Carlyle Campbell is named fourth president.

1959   Hunter Hall opens for science classes. The building is renovated as a home for departments of Human Environmental Sciences (formerly Home Economics) and Foreign Languages & Literatures. Sciences are moved to the new Science and Mathematics Building.

1960   Brewer House is built for students of home economics.

1964   Dr. Norma Rose is the speaker at the first Faculty Distinguished Lecture. The newly completed McIver Amphitheater is used for Class Day.

1969   The library moves from Johnson Hall to the new Carlyle Campbell Library; a sixth dormitory, Heilman, is added. Library history

1971   Dr. Heilman resigns as president. He is credited with continuing high academic standards, increasing faculty compensation and the number of faculty with doctorates, and expanding the student body by 44%.

1988   The Graduate Program is named John E. Weems Graduate School. Meredith is chosen to participate in the North Carolina Teaching Fellows Program. When funding for the state program ends in 2012, Meredith launches its own program, the Meredith Teaching Fellows.

1991   Meredith celebrates its centennial anniversary.  Also, the Brewer House was converted to the Ellen Brewer Lab Home for Infants and Toddlers to serve as a model of quality care for young children.

1999   The twenty-seven year Weems presidency ends; during these years, the size of both the student body and the faculty nearly double. Dr. Maureen A. Hartford is chosen as first female president.

2002   Four men graduate from the M.B.A. program, becoming the first men in the College's history to earn degrees.

2004   The Campaign for Meredith, the College's largest fundraising initiative, enters its public phase with a goal of raising $33.5 million.

2005   Cross Country is added to the College's intercollegiate athletic program.

2010   The School of Business earns Association to Advance Collegiate Schools of Business (AACSB) accreditation. Meredith is only one of two women's colleges in the world accredited by AACSB International.

2012   The Board of Trustees approves Meredith Forever, the College's three-year rolling strategic plan. Lacrosse is added to the College's athletic offerings.

2013   The first TEDx Meredith College is held on campus.

2015   Johnson Hall  was renovated and the new Ammons Welcome Center was created.

2016   Meredith added track and field as its eighth varsity sport.

Meredith celebrated the beginning of its 125th anniversary year.