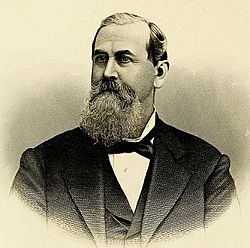 The Meredith property was formerly known as the Tucker Farm.  What follows is a brief biography of Major Rufus Tucker, the owner of that farm.
This report was written by Rachel Stenbuck, class of 2005, as part of  a Creative Ideas Fund Grant.

Most of the land on which Meredith sits was purchased from the estate of a wealthy Wake County landowner named Rufus Sylvester Tucker. The land was once part of the "Tucker Farm." Tucker raised Jersey cows, Oxford Down sheep and cotton, and was known as one of the best farmers in the county. [1] He was born on April 5, 1829, [2] and attended attended Raleigh Academy in his youth. [3] Tucker later attended the University of North Carolina with Gen. Johnston Pettigrew, Senator Mat. W. Ransom, E. Burke Haywood, Judge Victor C. Barringer, and Seaton Gales, graduating in 1848. [4] He served in the Civil War as quartermaster and commissary of Raleigh, but was eventually given command of an independent regiment of cavalry, the "Wake Rangers." [5] Both before and after the war, Tucker worked as a clerk in his father's mercantile store, which he inherited after his father's death in 1851. [6] With the help of his brother, William H. Tucker, the business took off, giving the Tuckers the reputation of not only being wealthy, but also being reliable suppliers. Rufus Tucker was a director of the North Carolina Railroad Company, the Raleigh and Gaston Railroad, and the Seaboard Air Line System. The Raleigh National Bank thrived under his direction until he left it to take on the National Bank of New Bern. For 31 years he was a director of the Institute for the Deaf, Dumb, and Blind at Raleigh, where he also served as president for many years. Tucker was a devout Episcopalian, and was active in Christ Church vestry in Raleigh for 20 years. [7] Because of his success as a businessman, Tucker owned thousands of acres in Wake and other counties. On one of his Raleigh lots Tucker built Tucker Hall, Raleigh's first hall for entertainment. [8] Tucker is also considered to be one of the first historians of Raleigh, compiling Early Times in Raleigh. He died on August 4, 1894 of a stroke, and his lands remained in his estate until being purchased by Meredith College. [9]

Carroll, Grady Lee Ernest, Sr. They Lived In Raleigh: Some Leading Personalities from 1792 to 1892. Raleigh: Self Published, 1977

"Maj. Rufus Sylvester Tucker" Cyclopedia of Eminent and Representative Men of the Carolinas of the Nineteenth Century. Vol. 12. Madison, Wis: Brant and Fuller, 1892

[3] Carroll, They Lived in Raleigh