A History of Cornhuskin'

The History of Cornhuskin' pages are a project of Dr. Fountain's Public History 300 Class, Spring 2008.

Of all the time-honored traditions at Meredith College, Cornhuskin’ has proven to be both the most legendary and complex. Eventually replacing the fall festival of Palio, an event that was inspired by an annual medieval fair in Italy, the original Cornhusking Bee began in 1945. The theme’s inspiration came from the Midwestern upbringing of Associate Professor Doris Peterson, where corn shucking bees were a traditional harvest event. It was initially held the day before Halloween and was designed to be a fall celebration to honor the freshmen sponsored by the Athletic Association. The festival quickly became a fierce competition between the classes, particularly against the odd and even classes.

The first events were held in the courtyard behind Johnson Hall and on the steps of Belk Dining Hall. As Meredith grew over the years, Cornhuskin’ expanded into a campus wide sensation. The original sequence of events began with a square dance performed by “hillbilly couples,” followed by judged contests such as chicken and hog callin’,corn shuckin’, and later apple bobbing. Closing events consisted of final prizes, community sings and refreshments. 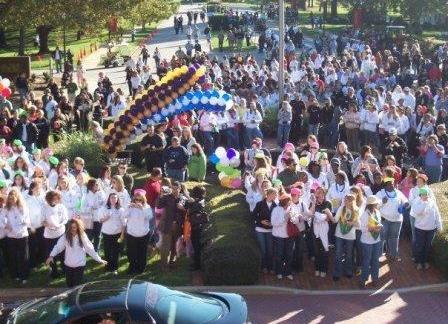 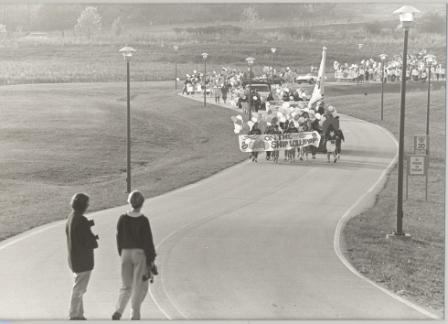 Modifications of Cornhuskin’ over time evolved to reflect increasingly more current themes and popular culture, particularly in the skits and songs. The most significant changes were represented in the evolution from the more rural “ Cornhusking Bee” to the more general “Cornhuskin’” moniker that transpired in 1966, and the much debated change from Thursday to Friday as the central day of activity that was officially accepted on the event’s fiftieth anniversary.

Amidst the notoriously nonconformist era of the 1960s and 1970’, Cornhuskin’ would also prove to be an outlet for the turbulence of the times. Increased threat of personal harm and property damage led to stricter rules and regulations governing the event as it, too, lost its innocence in its fervor. Despite all influences from the outside world, however, Meredith students and faculty have maintained a passion and loyalty for Cornhuskin’ that has preserved an institution for past and future students that embodies the true essence of Meredith sisterhood and community.
&nbsp
Sources: