The Gaddy-Hamrick Art Center is located between Weatherspoon Gym and the Cate Student Center. It houses all the art classes on campus, and includes an art gallery.

Dedicated in 1987, the Gaddy-Hamrick Art Center was named to honor Claude  F. and Mary Lilly Duncan Gaddy and Fuller B. Hamrick and their families. Mr. Gaddy was the former head of the Council on Christian Higher Education of the Baptist State Convention and a member of Meredith's Board of Trustees from 1946 to 1947. Mrs. Gaddy (Class of 1942) served as vice president and president of the Alumnae Association. Hamrick was the treasurer of Baptist orphanage in Thomasville, North Carolina and was Meredith's business manager from 1929 until his death in 1943. All were dedicated to Christian higher education, and to Baptist-affiliated Meredith College.

Previously, Meredith’s art program was housed in Jones Hall, in Johnson Hall, in the Beehive, in Joyner, in a house near Faircloth St., and in a temporary art studio between Brewer and Heilman Residence Halls. Once approval was granted by the Board of Trustees, the art faculty began planning for the ideal building by touring other facilities and gathering input from the instructors themselves in the various disciplines. With donations from the families and other numerous individuals, construction began in June 1986, and the building was dedicated in March 1987. For the first time, all art classrooms and studios were housed under one roof, allowing for both the centralization of study and the separation of the studios of various media..

Gaddy-Hamrick provides a concentrated area for art classes, and includes studios, a large art gallery, and an art history theater. In 1987, the 1500 square foot gallery was named to honor Frankie G. Weems, president of the Raleigh Fine Arts Society, and advocate for local arts, as well as the wife of Meredith College's president John Weems. A 2006 gift from Jane Williamson Teague (Class of 1954) enabled the art department to create a digital photography lab, install a gas kiln and build an sculpture garden near the entrance. 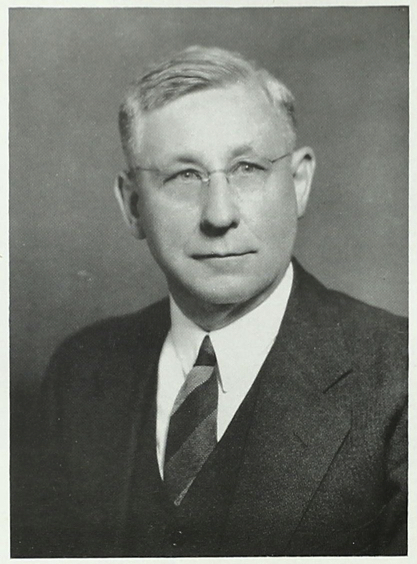 Delays and financial concerns resulted in modifications to the final building plans. 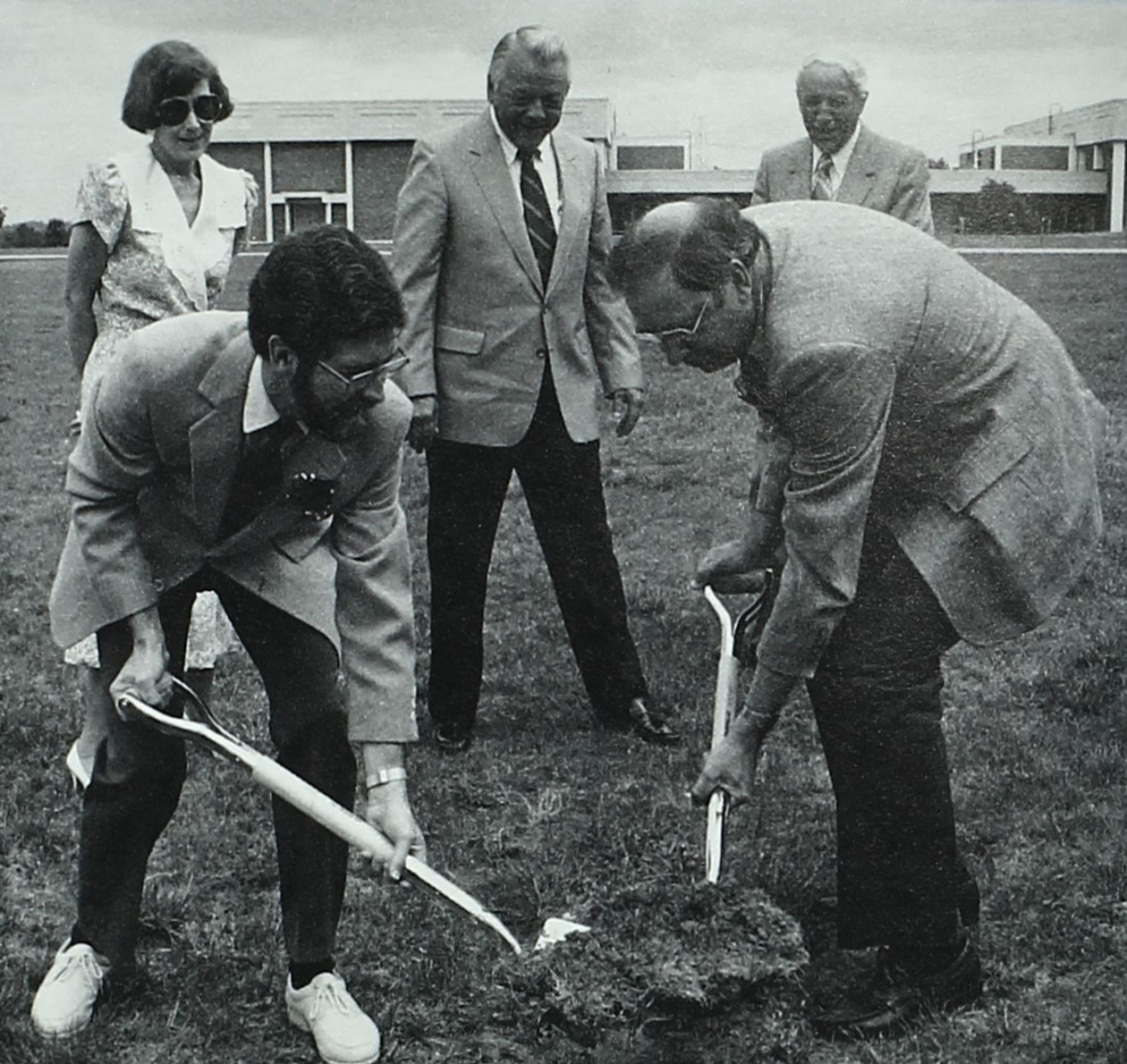 With Martha Hamrick Howerton (1947), Charles Gaddy and Seby B. Jones looking on, Dr. Craig Greene, the head of the art department, and President John Weems take the first shovel fulls toward the construction of the Gaddy-Hamrick Art Center.

The new arts building under construction by Davidson and Jones of Raleigh, as depicted in The Twig, the campus newspaper. The building opened to students for the 1987 spring semester, although the actual dedication did not take place until March. 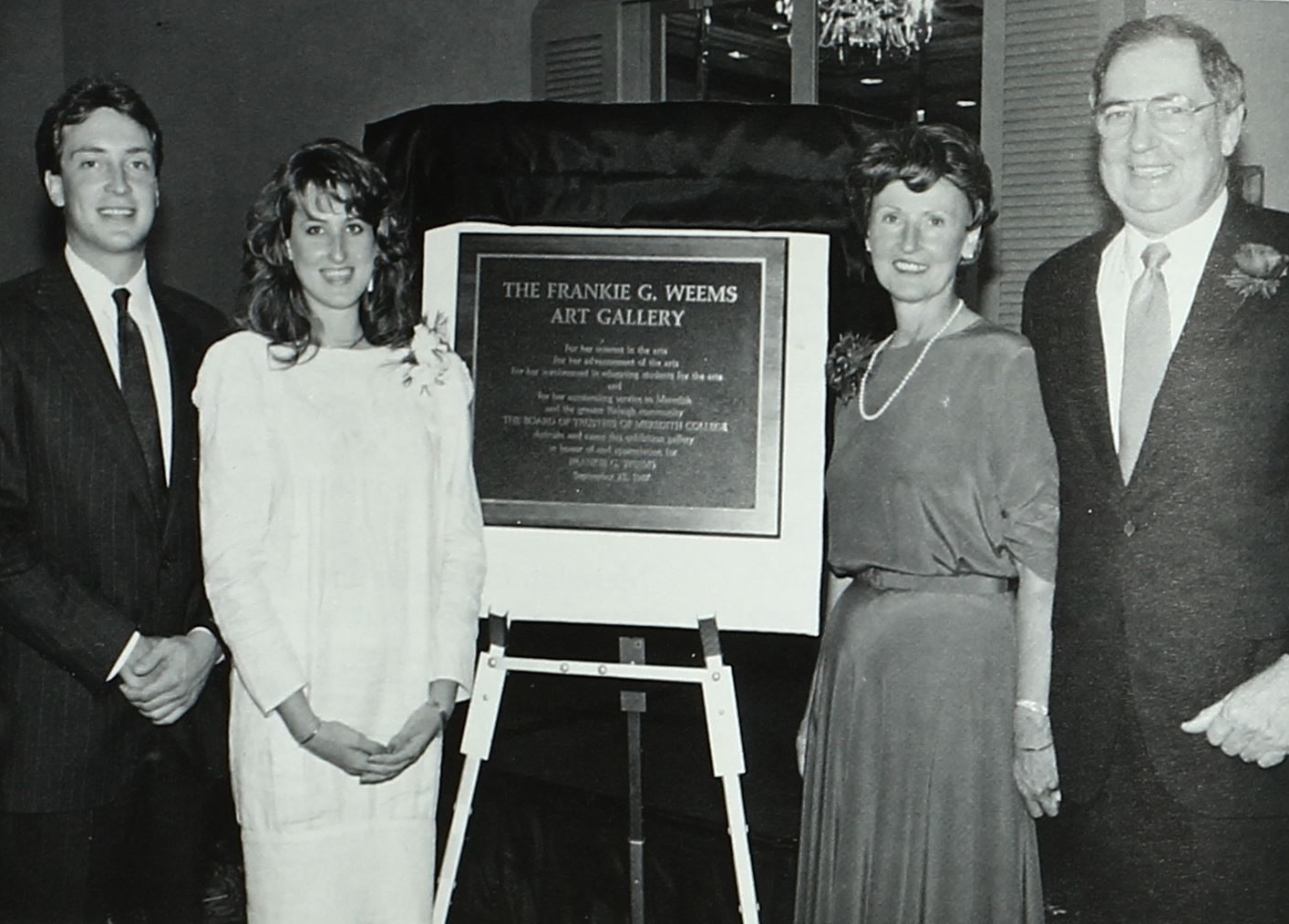 The Weems family pose next to the newly unveiled plaque honoring Frankie Weems.

In September 1987, the Board of Trustees surprised Frankie G, Weems by naming the gallery in the new Gaddy-Hamrick Art Center in her honor.

The first student exhibit in the Frankie Weems Gallery, April 1987

The 1500 square foot gallery was named to honor the work of Frankie Weems for "her interest in the arts, for her involvement in educating students for arts, for her outstanding service to Meredith and the greater Raleigh community." 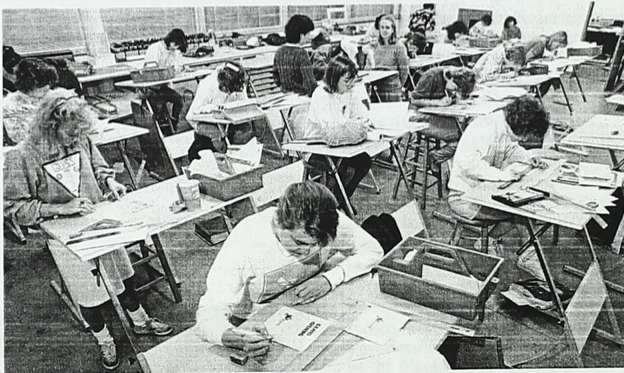 Much of the planning for the arts building centered on both consolidating all the arts under one roof and providing specialized and separate spaces for the various disciplines. 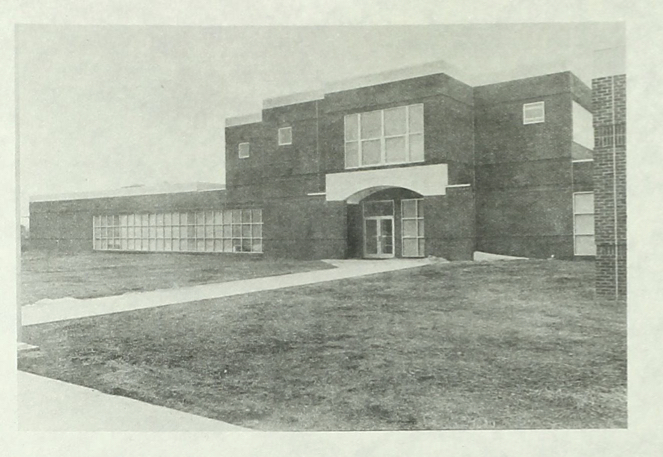 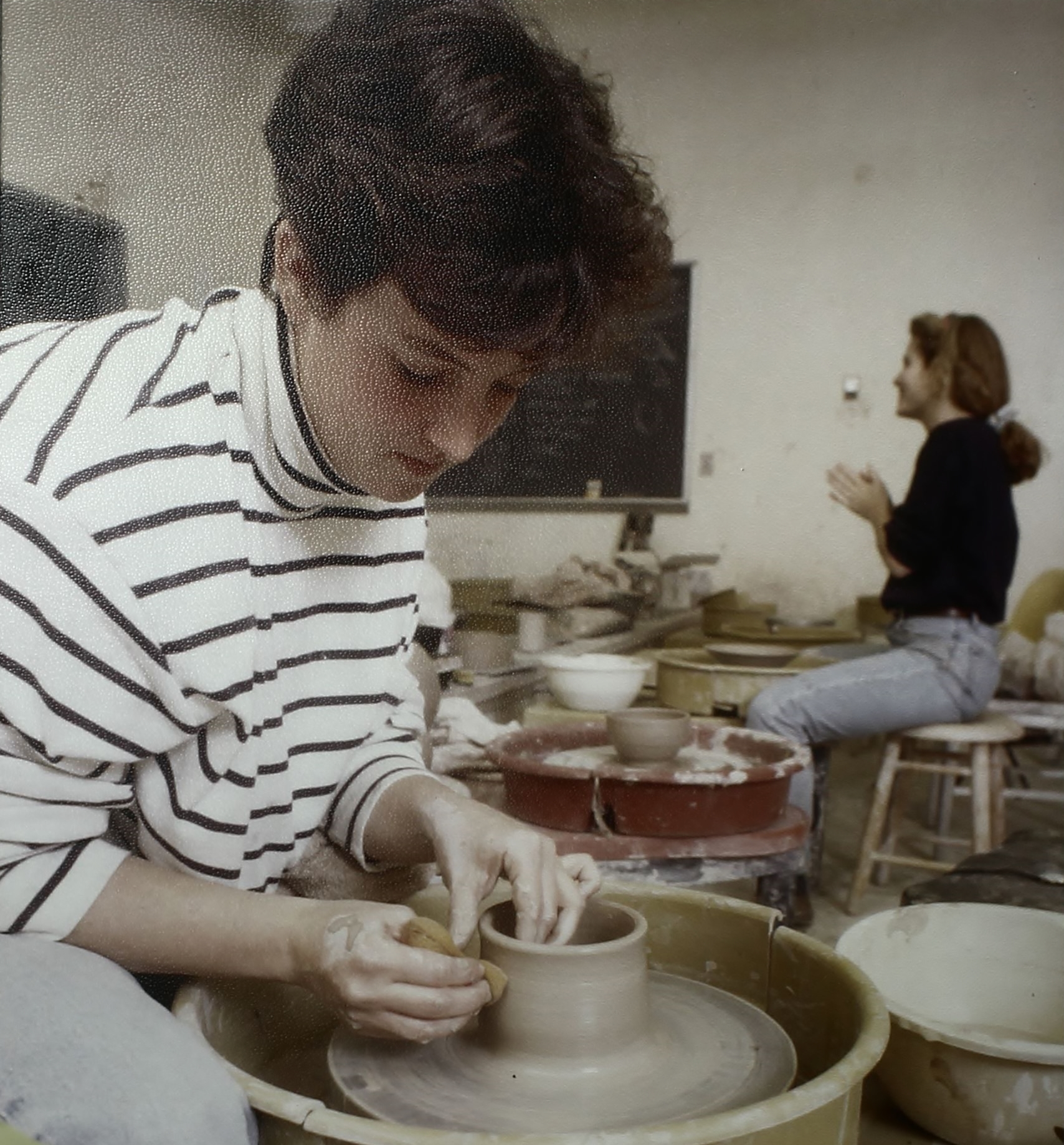 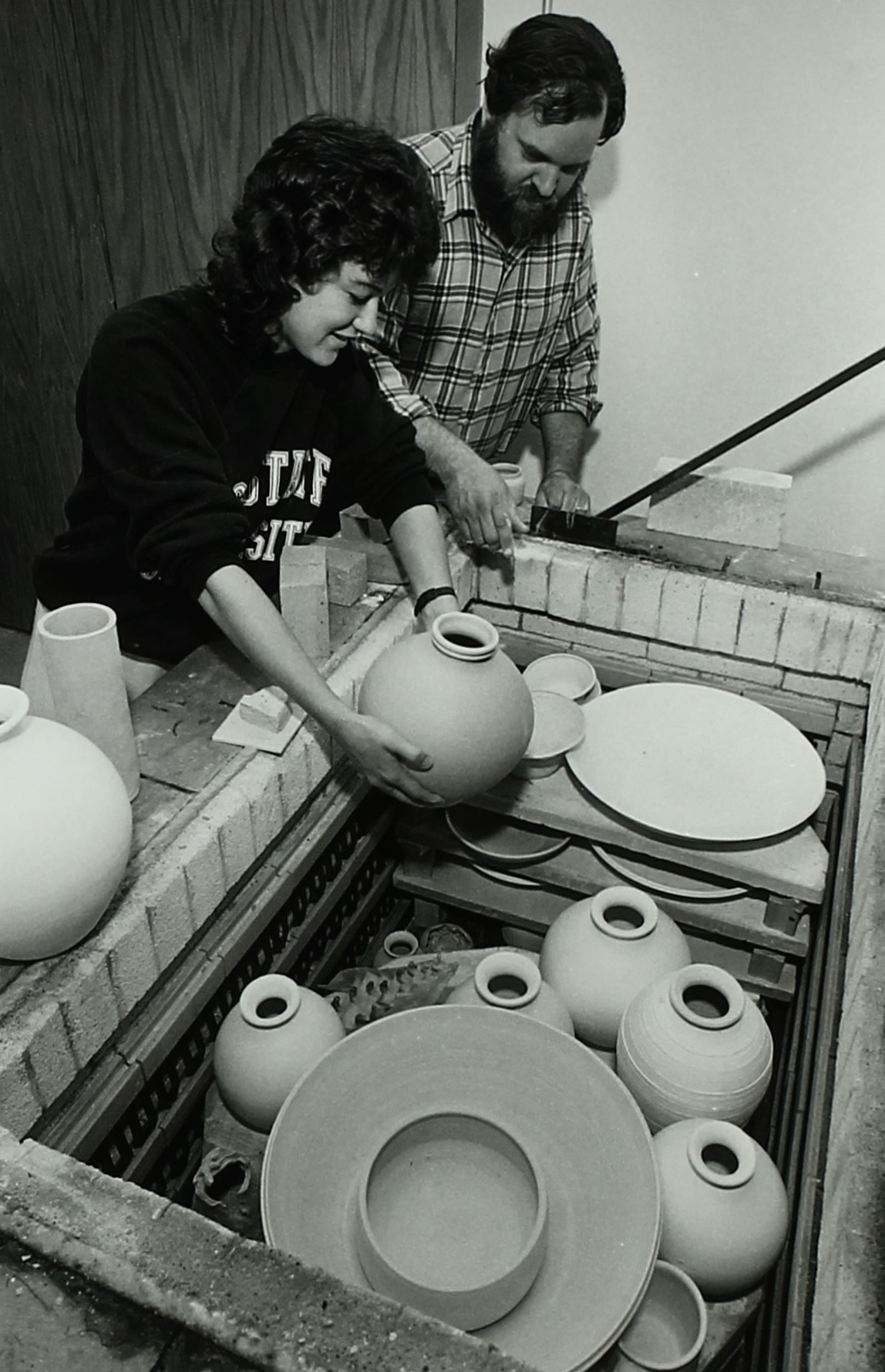 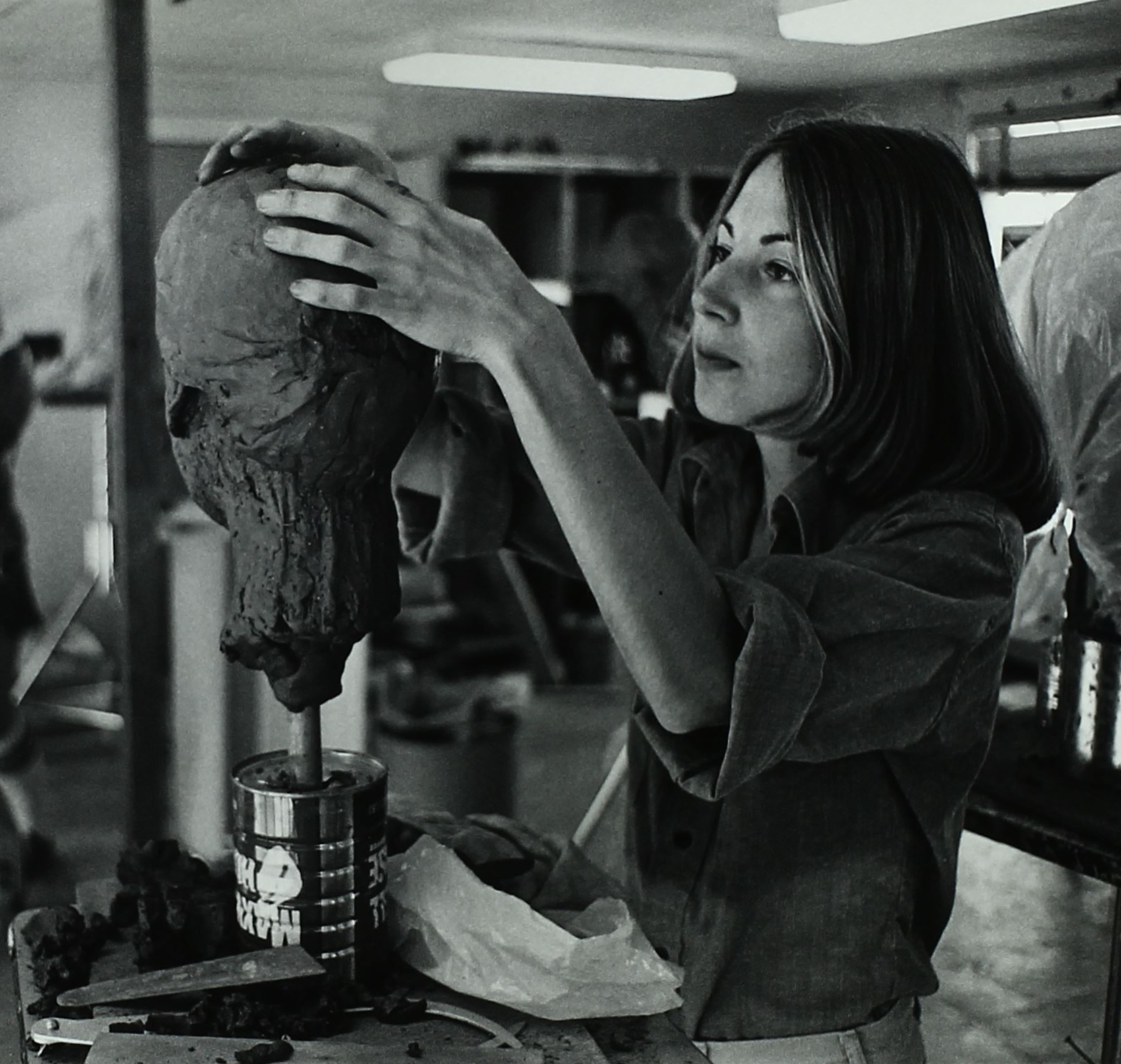 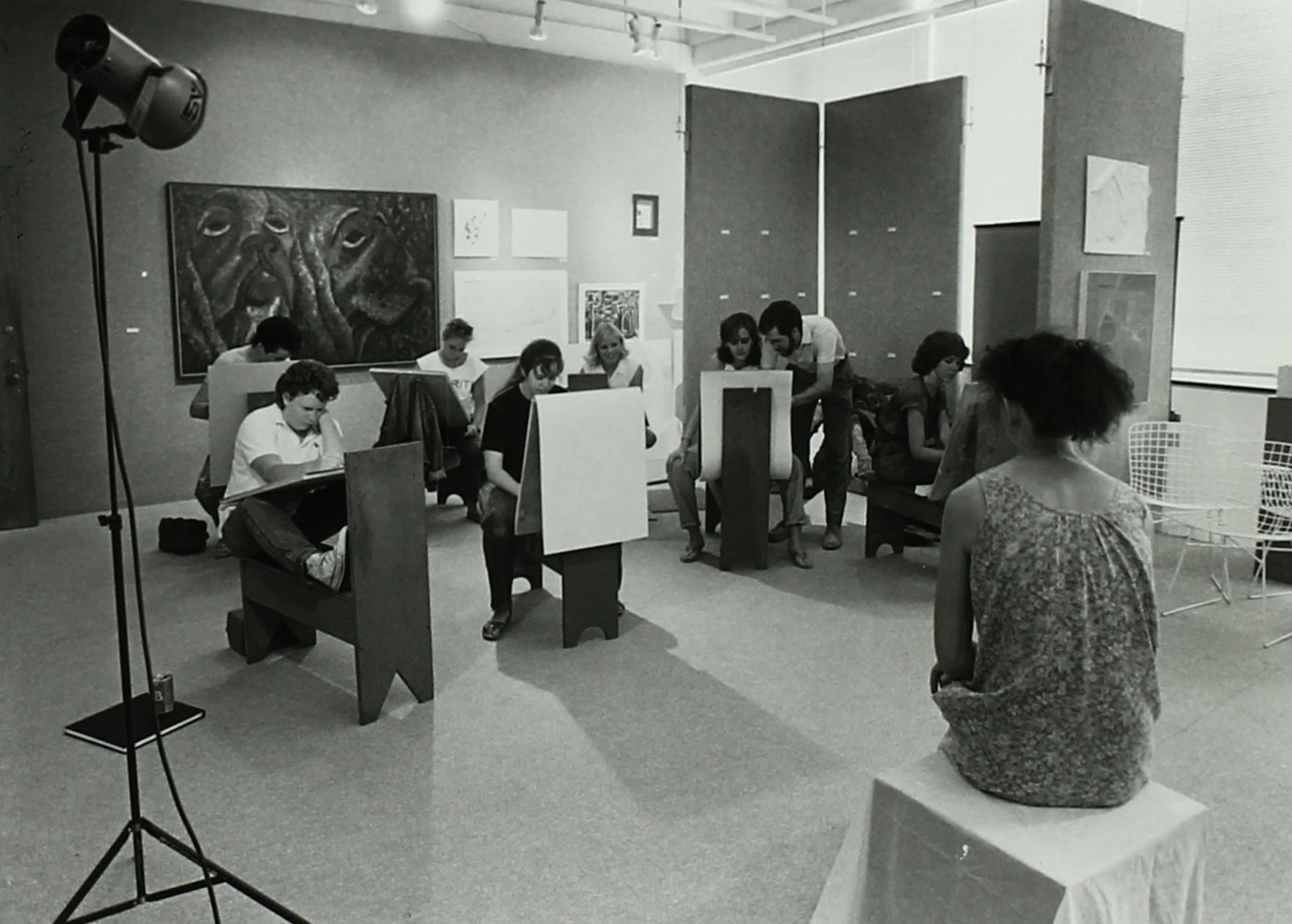 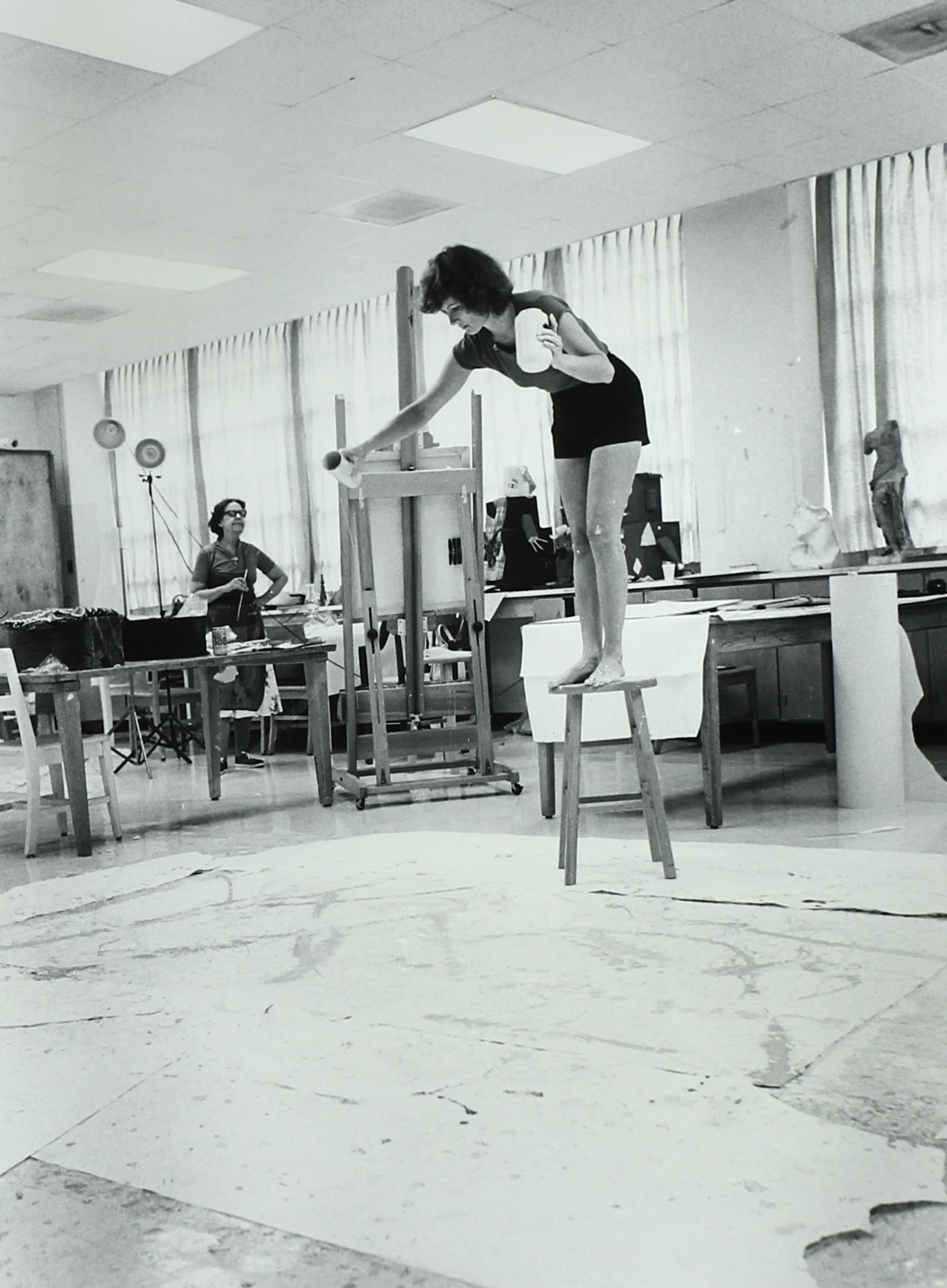 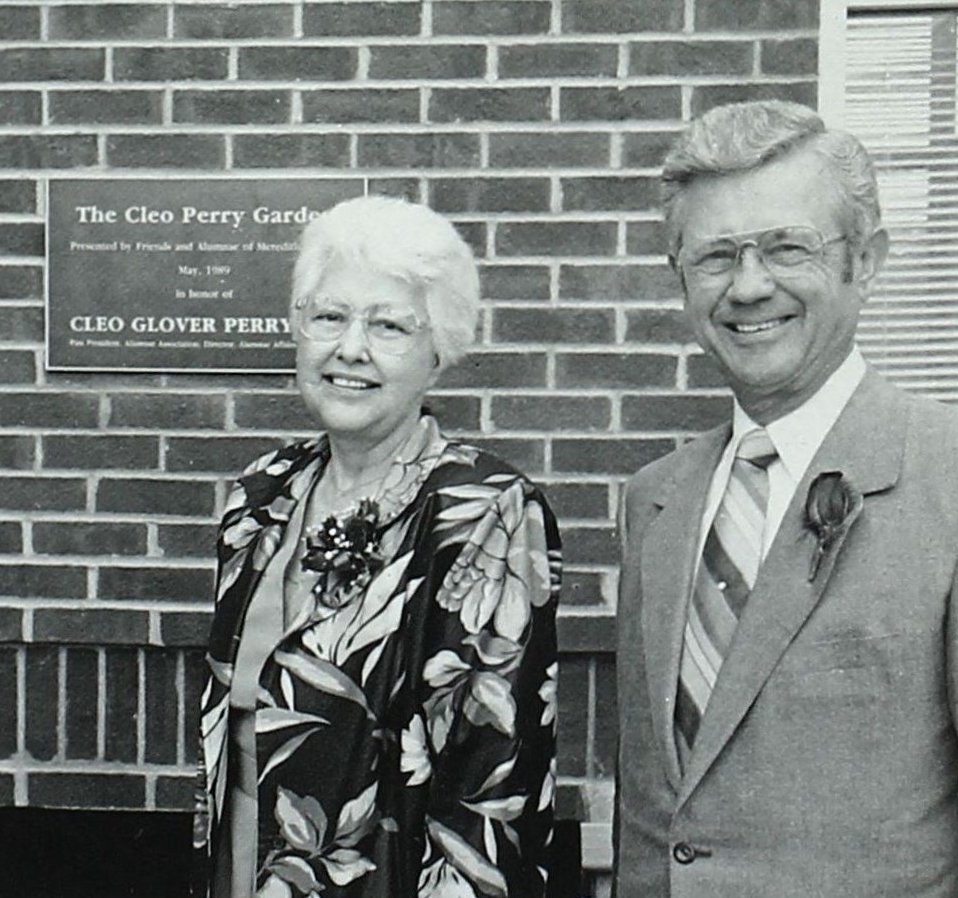 Cleo and Elwood Perry pose next to the plaque near the garden named in her honor.

In 1989, a garden cultivated adjacent to the Gaddy-Hamrick Art Center, was named to honor Cleo Glover Perry (1945), the Director of Alumnae Affairs from 1976-86 and president of the Alumnae Association for the 1966-68 term. 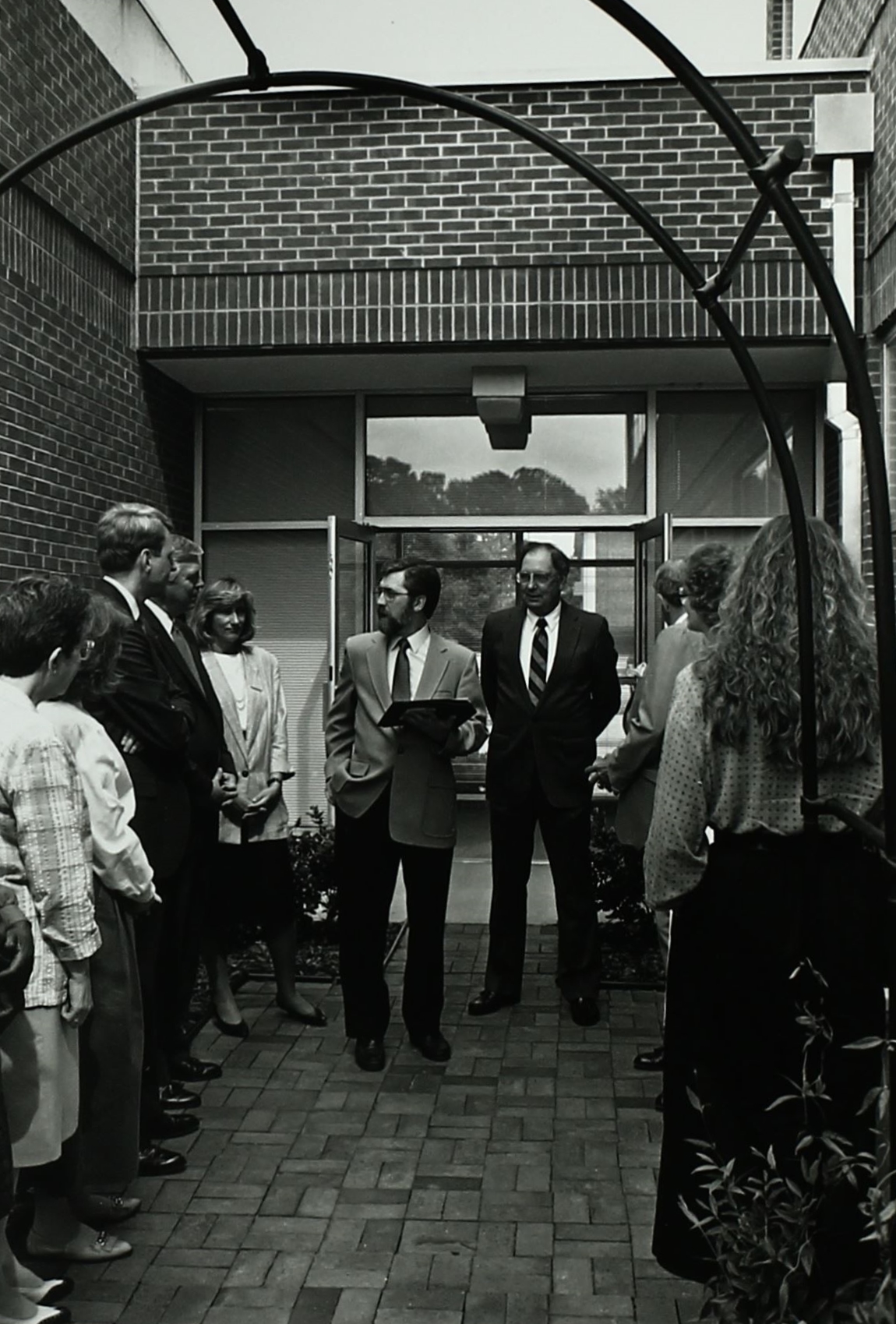 This intimate garden, with its decorative arch, was established to honor Mrs. Weems, "for her love of nature." 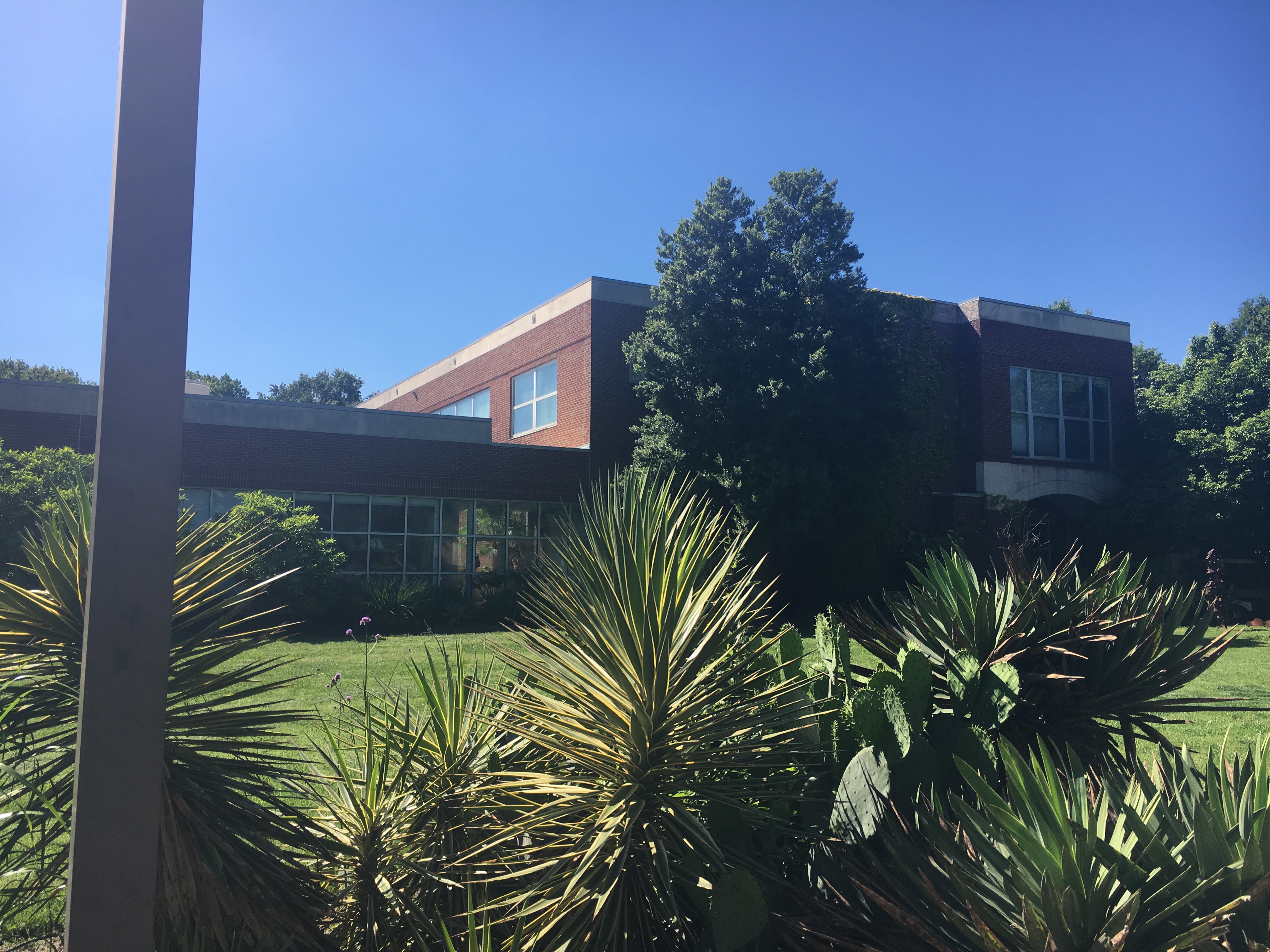 The Gaddy-Hamrick Art Center in May 2017