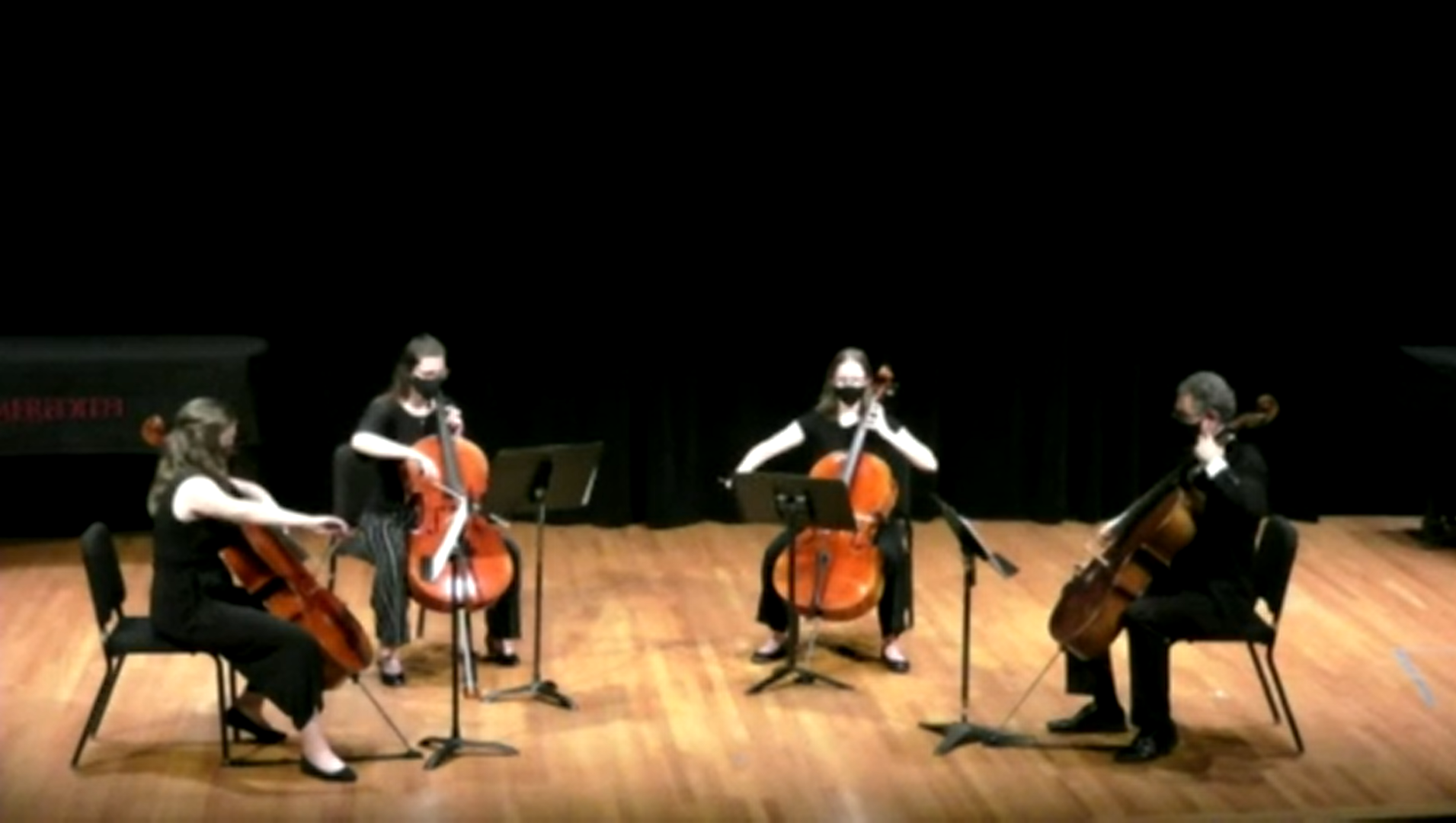 Join us for The Voice of the Cello, featuring three Meredith music majors, Alaire Donofrio ’24, Sarah Page ’23, and Julia Sullivan ’23 along with their professor, Jim Waddelow. We will enjoy a brief recorded concert by the cello quartet followed by a panel discussion with the musicians, conversing on their choice of this particular instrument, its unique properties and sound, and its contribution to a symphony orchestra.  The musicians’ individual and shared stories will enlighten us about this complex and appealing instrument.

We hope you can join us for an evening with Friends!

Click Here to Watch a Recording of the Program

Alaire Donofrio is a sophomore from Raleigh majoring in music. She is currently studying both cello and vocal performance and loves being part of multiple ensembles at Meredith such as Sinfonietta and Chorale. She began playing the cello at age 11 and continued to play throughout high school where she gained a passion for orchestra and the power of music to create a community. Other than music, she enjoys being a member of Meredith's Ethics Bowl team, Angels for Disability Advocacy, creative writing, and watching cartoons and musicals!

Sarah Page is a junior from the class of 2023. She is studying for a Bachelor of Science in biology, with a music minor. She has been a cellist for 9 years and is from Wake Forest. Outside of science and music, Sarah loves to write fiction, and would love to publish novels in addition to the short stories she writes now. She is also a big fan of hiking and doing jigsaw puzzles.

Julia Sullivan began her musical journey at the age of six when she started piano lessons as part of her academic curriculum.  Music soon became her passion, and as a sophomore in high school she began to study piano more seriously with Dr. Kent Lyman.  That same year, she started taking cello lessons with Dr. Jim Waddelow, the conductor of the Raleigh Symphony Orchestra.  She has now studied cello for four and a half years, performing in master classes and recitals, as well as participating in the Meredith College Philharmonic for three and a half years.  As part of the Philharmonic, she performs regularly in a piano trio, a string trio, and a cello quartet.  She currently studies cello with Virginia Ewing Hudson at Meredith College.  At Meredith College, she is pursuing a Bachelor of Arts in Music Performance and a Performance Certificate for Cello.  Her dream is to become a concert cellist, performing internationally with renowned orchestras.

Jim Waddelow is one of the most versatile conductors in the South. A native of Oklahoma, he is Music Director and Conductor of the Raleigh Symphony Orchestra and Artistic Director of the Oklahoma Haydn Festival. Jim also serves Meredith College as Director of Instrumental Activities, conducting the Meredith Philharmonic, Sinfonietta, Meredith Opera, and musical theater productions for Meredith Theater. In 2010 he founded White Iris Light Opera in Raleigh, and the following year he led Meredith musicians on a concert tour of Tuscany, Italy. Guest appearances have included theater companies and orchestras in Oklahoma, Texas, North Carolina, Arkansas, Kansas, Virginia, Missouri, Arkansas, and numerous all-state and all-region orchestras. Jim has conducted over 300 performances of more than 70 musicals and operas at the professional and college level. Previous conducting affiliations include the Oklahoma Youth Symphony, Lubbock Youth Symphony, Texas Tech University, Next Generation Performing Arts Camp in Joplin, Missouri, Inspiration Point Fine Arts Colony in Eureka Springs Arkansas, and the University of Central Oklahoma. A strong advocate of music education, he has conducted over 200 guest appearances and clinics in public school programs. A passionate proponent of the new music of younger composers, he is known for innovative programming. Press reviews have referred to performances as “bright, articulate, and beautifully balanced”, and “astonishing precision and polish; a joy from start to finish.” He holds a doctorate in orchestral conducting from Texas Tech University. 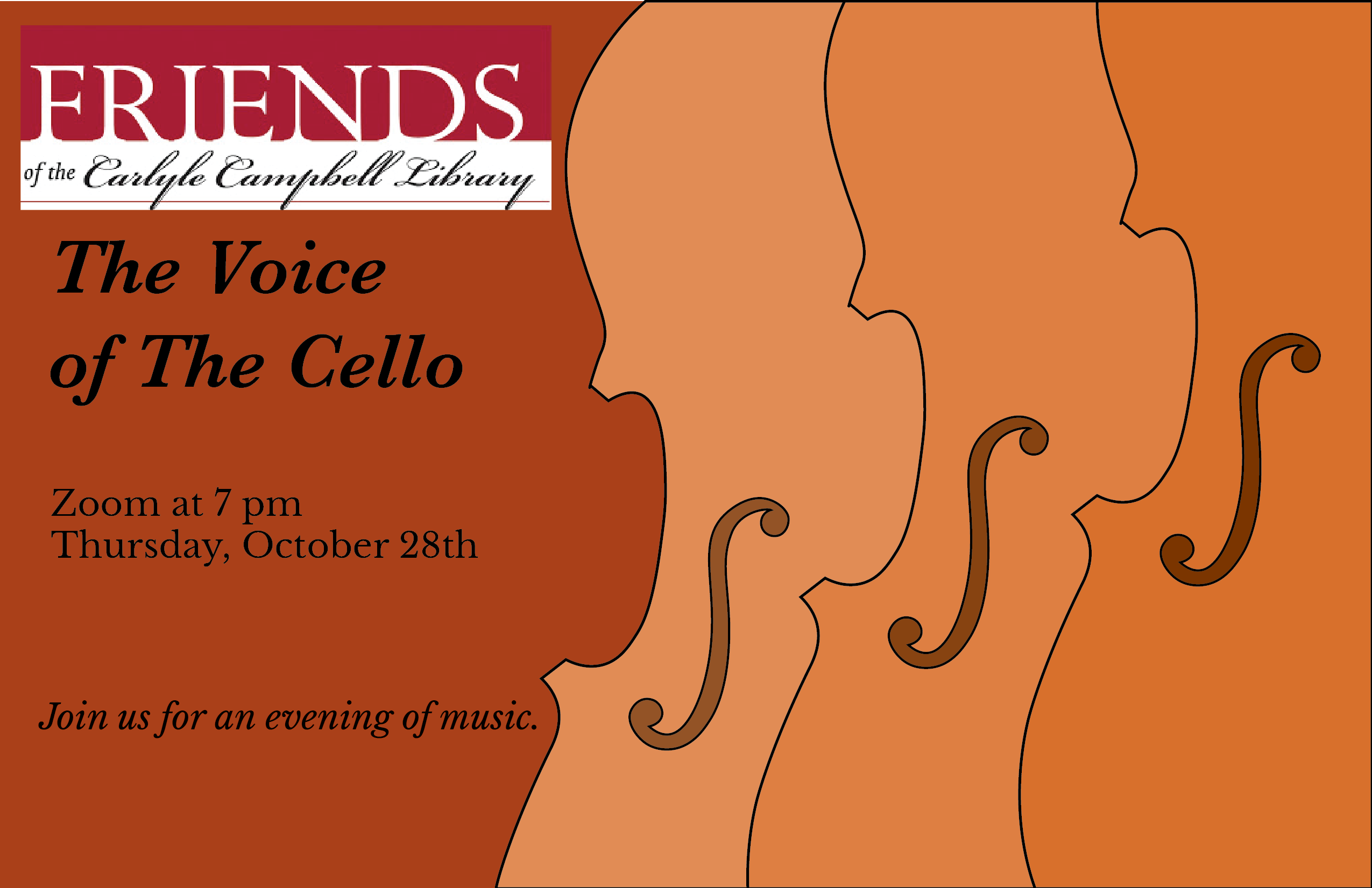 The Friends of the Carlyle Campbell Library presents

The Voice of the Cello

followed by a panel discussion