Rocky Mount native and Hillsborough resident Allan Gurganus won international recognition for his first novel, The Oldest Living Confederate Widow Tells All. Many novels and short story collections have followed including most recently, Local Souls: Novellas. Gurganus told one critic, “"My goal is to write the funniest books possible about the worst things that can happen to people. The sadder our world becomes, the holier comedy grows.”

See below for a selection of his publications. Click here to read more about him. 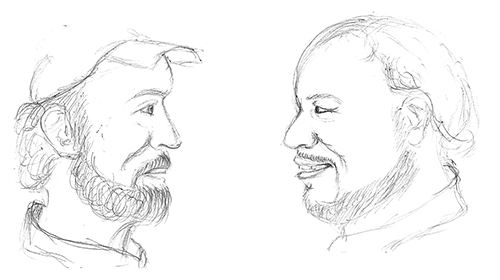 Friends of the Library Spring Dinner and Annual Membership Meeting

Join us as two gifted novelists talk with each other about their writing.

To make a reservation call the library administrative office (919-760-8531) to reserve your spot, or ask questions.

Sketch of authors by Monica Franco

The writer’s editorials appear in “The New York Times”. A recent essay was published in the “New York Review of Books.” Gurganus’s leftward politics have made him a commentator on the “Lehrer News Hour” and NPR’s “All Things Considered.” He was featured in the PBS “American Masters” series as a scholar-reader for “Walt Whitman, An American.” Gurganus wrote and narrated the original script “A House Divided: Poetry of the American Civil War” for BBC 4.

The CBS version of “Widow” won four Emmys. The writer was a recent John Simon Guggenheim Fellow and is a Fellow of the American Academy of Arts and Letters. Gurganus has taught literature and writing at Duke, The Iowa Writers’ Workshop, Stanford and Sarah Lawrence.

Of his last book “The New York Times” stated, “If there remained any doubt of Allan Gurganus’s literary greatness, ‘Local Souls’ should put that to rest forever.”

John Cheever wrote, “I consider Allan Gurganus the most technically gifted and morally responsive writer of his generation.”

From his website:
I was born in Winston-Salem, North Carolina, and was youthfully, loudly resolved to travel the world and never darken the city limits or the backwater that was North Carolina again. I went to school at Michigan State University (satisfying now and forever my “snow fix”), then I moved to New York City to make my fortune (1982-1985), which I didn’t, though I did work–preposterously, after a lifetime of being picked last for every sport played by humans–as a reporter for Sports Illustrated magazine. I was the NASCAR geek back in the ’80s when no one cared up north about NASCAR. Then, equally unlikely, I went to graduate school at Oxford University (1985-1989) to get something called an M.Phil, a master’s degree which Oxford eliminated soon after I got one. I also lingered two more years to work on a never-completed doctorate: turn-of-the-century travel writings of Henry James in his late manner.

This was a stall until my first novel (Emma Who Saved My Life) found a publisher. Which it did, at St. Martin’s Press in 1989. Gluttons for financial punishment, SMP has published the next three: Gospel (1993), Show World (1998) and Lookaway, Lookaway (2013). Soon, I intend to unleash a tsunami of short stories upon the world, but two have already been collected in anthologies: “Mrs. Dimbleby” in The Story Behind the Story (Norton) and “Stoma” in Long Story Short (UNC Press).

NC State’s MFA program (which I directed in its fledgling years) is new, intimate, and wonderful, principally because of my conspirators and fiction colleagues John Kessel and Jill McCorkle, and our poets Dorianne Laux and John Balaban.

Wilton Barnhardt, born in Winston-Salem, is currently on the faculty of NCSU’s creative writing program. His very well received novel, Look Away, Look Away, is his fourth. He describes himself by saying, "I've eluded categories. I'm not a naturalist, I'm not a romantic, I'm not a realist. I would probably say that I'm a classicist. I hope I'm writing sort of the classic novels of the 19th century. I'm nervous about being in any camp. I have a New York novel. I have a religious novel. I have a Hollywood novel. [Lookaway, Lookaway] is the Southern novel.” A reviewer called the southern novel “that rare thing: an excellent long novel that's not long enough.” Click here to read more about him.

See below for a selection of his publications.